Patricia was born in London, England in 1933.  After attending school in Hertfordshire, she studied techniques of jewellery making at the Central School of Arts and Crafts, (now part of Central St. Martins, University of the Arts) London from 1956-1960.  Patricia married her husband, the artist and architect, Jacob Meyerowitz in 1957.  Patricia and Jacob became very interested in the work of Wilhelm Reich and orgonomy.  They moved to the States in 1970, first living in SoHo, New York before moving to Easton, PA in the 1990s.

'Patricia began making jewellery in 1962 and over time established herself as an expert in the field.  Exhibitions of her jewellery were displayed throughout England and the United States.  Most notable, her jewellery was included in the Smithsonian Institute Touring Exhibition of 1970-71 and she was a featrued artist at the Victoria & Albert Museum, London in 1984.  She also authored 'Jewellery and Sculture Through Unit Construction' in 1967 which was reissued several times.

As well as designing jewellery, in 1962 Patricia began sculpting in metal and wood. Her work is still displayed thoroughout the world and is in private collections owned by, among others, Cartier and by the Victoria & Albert Museum.  Her jewellery and sculptures are visions of her own geometric constructionist ideas of form and proportion.  Many of her inspirations came from the molecular structure of a virus. Another one of her creations can be found in Easton, Pennsylvania, 'Easton Eclipse' towers up over the Delaware and Lehigh Rivers and gives rise to her creative genius.

Patricia is also a well-known expert on the writings of Gertrude Stein.  She edited and wrote many of the forwards in books on the matter.  In 1969 Patricia published 'And a Little Child' which focused on the abuse children endure from infancy into adolescence and how to rear a child to grow up naturally using his or her own instinctual needs.'

Above excerpts taken from an article in the Easton Recorder on the occasion of an exhibition of Patricia's work to mark her 75th birthday in 2008. 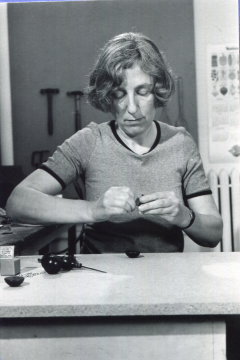 Patricia at work in her studio in Soho, New York, in the 1970s

This purpose of this website is to provide information on the life and work of Patricia Meyerowtiz.  Please browse the site and if you have any pieces of Patricia's jewelllery and would like to have your piece on the site, please contact us.  Thank you for visiting this page.

Exhibition of work by Patricia Meyerowitz